I have a peculiar habit at the beginning of every semester: after adding all the classes that I’d been planning to take (largely a mix of boring technical classes and fun technical classes; a mixed bag of 16-18 hours, but all technical), I then proceed to add on one or two more from one of my other curricula of interest. This semester, it happened to be computer graphics, which incidentally turned out to be my favorite class.

Of course, I initially intend to keep all 20-22 hours of classes, a way of staying ahead while still doing what I want to do; hasn’t happened yet. This semester felt different; the classes at least, seemed manageable.

Thursday evening, I was sitting in the food court of the union, oddly alert after having slept about 10 minutes the night before, gone through 2 interviews, having just finished 7 hours of classes, and now studying for an hour quiz for 410, after which I needed to meet with my HKN group to plan our Wii tournament, and thereafter spend 2 hours on STAT homework, 4 on MATH 415, and plan for a meeting with a fellow researcher all for Friday—when I saw the first familiar (non-classmate) face of the day. Dev came by after I hailed him, and proclaimed that he had “nothing to do”.

Yep, he had so little to do, that after the featherweight bounce he had strolled in with, he was gonna go bowling. This had little impact on me then, as I had some final catching up to do, but it came back to me many hours later.

I had debated with Jon a week before, about exactly *why* we were such workaholics — piling on more and more work because we think we can, and then busy feeling so guilty when a moment went by unproductively. That day, I argued that we did this because we were motivated, that while most people would do what they needed to do, and then go about being idle, we actually drove to further ourselves, to push forward with far more than the average load, and succeed. That, we declared, was the key to success, and the reason why instead of lounging around, we put ourselves through all this excess. Back then, it made perfect sense, and satisfied, I went about doing my 418 MP, feeling motivated again. Now, after returning from the Wii meeting I surveyed the 7+ hours of work I’d have to do just to catch up to the homework due that day; and then all that reasoning from before fell apart, and suddenly, I was left feeling a lack of purpose.

This all felt stupid. Before, I had prided myself by keeping a balanced lifestyle; mixing fun with productivity, pursuing hobbies, exploring personal interests, reading for pleasure (God, when was the last time I did that???), and really, giving myself enough time to catch up with the life I was living. Now, well, I still did some of the aforementioned, but overall, I was working non-stop. I don’t even remember the last time that I had “free-time”; there was always something due on the horizon (if not the next day), and it’s kind of hard enjoying yourself when you’re feeling guilty that you should be doing something else.

In any case… this all seems kind of ridiculous, a little excessive, and I need to rethink my priorities. I *do* have a LOT of interests beyond the technical work that I’m doing, and I’m beginning to feel their absence. So, for the rest of the semester; while I’m on the job hunt for summer.

Well, that’s all for now–and since I said I’d post up pictures of the snow… 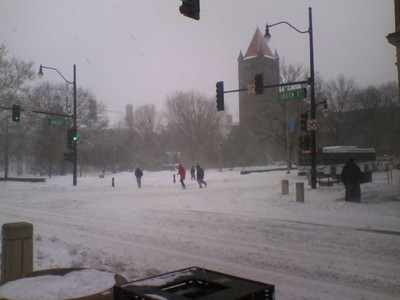 People evade the skidding bus… you can’t really see it, but there’s a blizzard of snow blowing around. 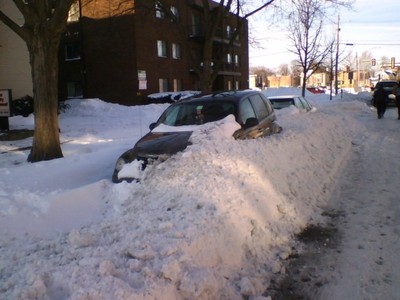 Cars that won’t be going anywhere for a while… 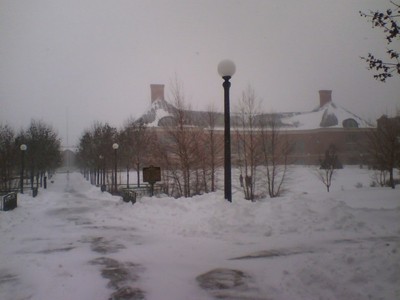 Over there is the library!