Semester 5 is nearing it’s end, it’s hard to believe that I’ve spent five whole semesters here at this school. In some ways, I feel like it’s just the beginning… but of course at this point, it’s a bit closer to the end. So in early retrospect, what have I gotten from this experience? It’s quite different from what I had expected at the end of senior year in 2004… a bit different from what I was left with at the end of freshman year. There’ve been some truly great times, and of course, some that really could have benefited from better foresight (hindsight gets too much credit these days).

Oh, for sure, things have definitely changed over the past two-and-a-half years… I’m not an English major anymore, having gone back to my technological roots . I’ve made a few more friends. Okay, fine, a lot more. Travelled to China, gone back to Korea again… found God, walked from God, lost self, found self, and other crazy rollercoaster business… learned to make angel-hair pasta with chicken…

…learned that yeah, I was right –I can be pretty damn selfish without knowing…

What am I left with, looking back on this era of my life? I don’t now, I really don’t–I just know that time, indeed, has passed by faster than I could have expected. And just as high school blew by, I know that all-too-soon, we’ll be packing our bags and boxes for the last time on this little hovel in the cornfields.

But really… right now, the best I can say is that… I sense that the best is yet to come. Wistful thinking… yeah, it could always just be that. But then again, I don’t plan to let it. Life is too short, and has been too short to go by without getting much better.

Now, it’s about time for winter break. 2 more finals, 4 more days… can’t wait! Good luck to ALL, dear readership, and may you all find your destinies this week.

I’ve put my engineering skills to good use last week. While working on our semester project for ECE 385, bad luck struck us hard. Everything started falling apart, from our FPGA board to Xilinx–to Windows on my computer (which randomly crashed for the first time in an hour). And then, as if it couldn’t get any worse, as I was typing up the report that was due the next day, my keyboard suddenly stops working. Well, part of it. The entire bottom row from Z to M ceased to work. At first I thought it might be the battery, but all the other keys were working.

Normally, it wouldn’t have been so bad, but my backup keyboard was in the 385 lab from a previous project, and given how everyone else uses laptops, there was no replacement. I tried restarting the computer in hopes that something would change… but then, I realized I couldn’t log into my comptuer anymore (password contains an ‘n’)! Of course, then I can’t access my files since Windows is clever and encrypts files by account. I ended up  loading into Safe Mode and logging in as the administrator, moving the files, and finishing the work on my laptop (which was another hassle to move my work onto, lacking a USB drive, or a working memory stick drive on the laptop, OR wireless internet in our apartment…), but they keyboard problem was still an unsolved mystery.

I came back a couple days later (after having finished my presentation for ECE 316–my favorite class of the semester), I decided to tackle it once more. By Friday, something weirder was going on. I turned my computer back on, and at the log in screen, I realized the bottom row started working again! I was happy for a moment… but something was wrong. I kept typing in my password, but it still wouldn’t log in. I did each letter one-by-one and it STILL didn’t work. Something didn’t make sense… I logged into the Guest account, and loaded up Wordpad, and started typing. What I saw baffled me.

The entire bottom row, had been transformed into the top row. As in, Z typed Q, X typed W, C typed E, and so on… it made no sense! I half-suspected that it was some sort of software issue, a prank-virus perhaps, but that wasn’t likely. Jon suggested that I buy a new keyboard, and at this point, I was about ready to do so. This keyboard was dirty, old, and clearly, falling apart from the inside … I decided that I’d make a last ditch attempt to figure out what was going on–by opening up the keyboard and seeing the inside!

There were 15 screws on the back, an ANNOYING hassle to remove, but once I got them out, the cover came off easily… and I was presented with a rubbery layer, and a couple plastic sheets with wires etched onto them. So that’s how keyboards worked. Two sheets of plastic , etched with wires (one with horizontal wires, and the other , vertical wires) are seperated by another clear plastic layer with holes where the keys are. When a key is pressed, the wires form a circuit, and the route is unique for each key. And blah blah… not that anyone else cares, but having worked with keyboard makecodes for a month, this kind of stuff seems like kindergarten.

Anyway, I decided to wash the keyboard while I was at it:

My hair is *way* too long (but thanks anyway, AirConditioner!) 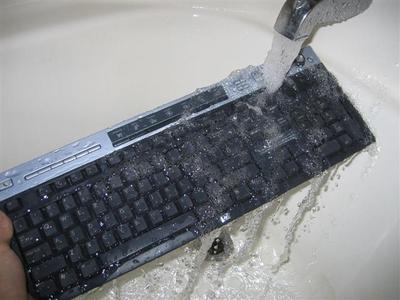 Of course, my keyboard is waterproof

Anyway. I looked closely, and I saw that the row of keys that weren’t working were all on the same line. Looking further, I saw that this ‘line’ was minorly corroded in several places, and in one place, it was even corroding into the next line. This explained a lot, as the next line was the one for the top row. I scrapped off the corroded crap, and now we were back to square 1, with no the letters not working. At least I had narrowed it down to what. Close observation showed that the wires were shorted in 3 places (how this happened simultaneously, is beyond me). I thought if I could connect them back together, it would work. So, I made an attempt. I sliced one of the wires from old ear phones (that no longer worked), and fashioned a short testing wire, to see how far the signal would actually carry. And somehow, each section was cut into it’s own wire. Eh, so I figured that I’d try and tape some wire on (far-fetched, I know…) and see if the signal could carry through. 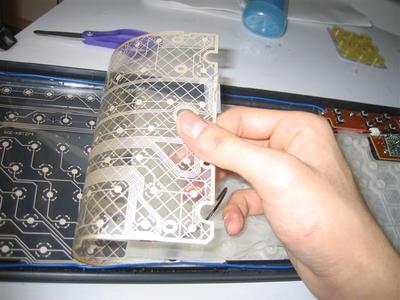 Okay, this story is getting boring, so I’ll end it now. It worked! I was amazed–least of all having expected that such as small fix would work. In the end, I saved myself $50, and had the satisfaction of knowing that I
had done something productive! I was pleased

It’s the sound of morning rain over here–grayness everywhere, and you know what? There is little that can leave me more satisfied. After 12+ hours of catching up on CS (reading, note taking, listening to Zych on fast-forward) and working, I’m done with the final MP for the semester. Of course, I have many a junmoo to thank–but hey, now I can teach some basics of Visual Studio debugging to anyone interested; FAR superior to that DDD crap we’ve been using.

Of course, now it’s 8:11 AM and my body clock is completely out of sync with the world. And just as I’m about to put myself to sleep, I’m hungry
again.

And check out what I just acquired: 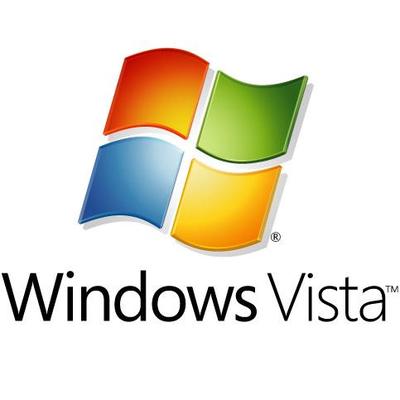