I’ve been meaning to talk about The Interview since I first watched it on Christmas Day, but oh well, Happy New Year world!

Tl;dr: I thought the movie was awesome delivering laughs, memorable one-liners, and a unique satirical take on American hopes and fears of the reclusive state and it’s leader, in a genuinely hilarious fashion. For satire, there are some great nuggets of truths in The Interview, and it’s expressed in the right doses of seriousness in the film. If you’ve displeased yourself while watching this movie (yes, it’s your fault) you’re probably taking it too seriously; for those that weren’t tightwads in college, the humor will probably deliver. Added tip: try watching it in Washington or Colorado.

The controversy around Sony’s release of The Interview was much talked about for good reason. That an international conglomerate as powerful as Sony, with annual revenue equal to about a quarter of North Korea’s GDP, could wither under the pressure of anonymous hackers on the internet, initially canceling the film’s release, surprising many. It is absolutely worth noting and remembering that this started with the cowardly decision on part of movie theater chains to pull out of showing the film. Equally cowardly was Sony’s decision to make a statement in-effect cancelling any sort of release. The backlash by the American social media populace was rightfully swift, with round condemnation from the internet to the President saying that “Sony made the wrong call” by basically caving in to anonymous threats.

Economic moves aside, that Sony was influenced by pressure from hackers (regardless of their disputed origin) amounted to a clear defeat of the freedom of speech and sets a completely wrong precedent for speech as a whole. Sony eventually backtracked (what a bunch of flip-floppers), allowing more forward-thinking VOD distributors to embrace the film’s release as a cause. Google instantly became a worldwide movie theater, and scored the vast majority of the views via Google Play and Youtube at time of release.

The official rhetoric of the DPRK should surprise no one, and for those that have learned not to take too seriously, it’s quite hilarious. In the real world, I felt that their previous UN protest of the film is actually a positive indication that they are taking international mechanisms for conflict resolution seriously.

“Obama always goes reckless in words and deeds like a monkey in a tropical forest,” North Korea’s National Defense Commission (NDC) continued, adding that President Obama “is the chief culprit who forced the Sony Pictures Entertainment to indiscriminately distribute” The Interview, a film that is “hurting the dignity of the supreme leadership of the DPRK and agitating terrorism,” the BBC reports.
– From an article in the Rolling Stone

For those thinking this is just a bizarre isolated case of backlash against perceived deprecation of deified figures should recall not-long-ago Danish cartoonish controversy. There too, fears of death began to have a chilling effect on what people would/could say with possibilities of provoking an angered reaction. For a country that reportedly worships Kim’s cult of personality like the living messiah, it’s reasonable to think how the idea of a low brow comedy (though not the first) about their equivalent of Jesus or the Prophet Mohammed could offend, and even I’ve seen conflicts of western values of free speech when it comes to satire of religious figures.

It’s too bad, because it impedes the enjoyment of an otherwise hilarious comedy that indeed, will not appeal to all. Some say that the movie does injustice to those genuinely suffering under the regime, but the truth is, satire is a great way to encourage discussion about valid topics. That America public cares about North Korea at all should be the surprise, and if anything, a complement to the regime’s notoriety. Poking fun at the leader Kim is already an internet pastime, and this movie just pushes that forward AAA-style. Those of us that are from the internet are a great reflection of how seriously hitherto, America has taken the current Kim: 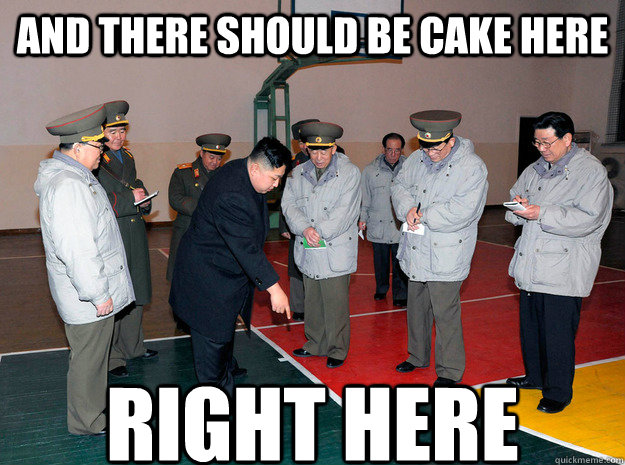 The distinction that Sony Pictures does not represent any official policy statement of the US government, may be lost on the North Korean leadership, who probably take this way too personally, and likely add to their fears about exposing their house of cards to their information-controlled population. North Koreans, allegedly, are taught from early childhood that their cult of personality leadership are demigods upon this earth and are raised in a institutionalized state where this is constantly reinforced. It’s hard to say when this started, but assuming it’s been since the state’s founding in 1948, it has now gone on for three generations, possibly producing a nation of zombie-like followers with no sense of humor, or understanding of comedy, particularly when it comes to their deified leadership, all to easily angered at any perceived slight against their divinity.

Regardless of whether or not American comedy writers are obligated to take these things into consideration, this specific case highlights a unique interaction between private media and state (or possibly stateless/rogue) agents and is a clear indicator of the influence of soft power in international relations. It’s interesting that the controversy comes from both sides, with another subset of folks calling out that the movie “humanizes the brutality of the leader Kim”. This too, I believe is silly. Looking back at the lens of history, countless times, scholars have found it useful to understand the perspective of leadership as individuals, and I will admit, there is a certain sense of American hopefulness in the movie.

In one of my set of favorite scenes, where Franco’s character is out bro-bonding with Kim, it’s revealed that Kim secretly is a Katy Perry fan, playing, of all songs–Firework — listening as a 30-year-old kid with affluenza, so detached from the plight of his people, yet so trapped by the cult that his father and grandfather he created that he too, feels forced to continue the role. In the movie, Kim plays the role of the misunderstood villain, who might just as well be a cog in the huge wheel of history that move nations to fight each other.

This song has been stuck in my head for days now! Thanks @sethrogan…

I like that the movie seems to ask if it has to be that way, playing into our confused depictions of what’s going on over there. The depiction of course, takes much creative license, but given how little we do know from oddball ventures like Dennis Rodman’s affairs in North Korea, we’re forced to imagine the true nature of the leadership. One line of thinking could take us to where this film does, and of all possible ways of depicting the DPRK’s Kim, I found the movie’s version quite novel, but with a level of authentic believably that even North Korea watchers say reflects some truths. It’s not hard to not feel bad for the guy, trapped in the shell of what must be a very insecure role, living constant in fear of enemies, both foreign and domestic. One could almost even imagine this 30-year-old Kim trolling the underworld of the internet with monikers such as the “Guardians of Peace”, while overcompensating for his fear with all to familiar bombastic outbursts fit for a child throwing a tantrum. The writer’s choice of Firework plays particularly into the zeitgeist of the Millennial generation, which, we mustn’t forget, that Kim Jong-un is also a part of. So can’t we figure out a better way?

As a Korean-American, I’ve been particularly sensitive to mischaracterizations in popular media, but I didn’t find the storywriters depiction too far out of left field; this is a Seth Rogan comedy after all, and it appeals quite well to the crowd it targets. As a satire reflecting the American mood, I felt the movie depicts how we wish it could be; a huge misunderstanding between people that in another world, would probably get along. Maybe Rodman was onto something. Lol.