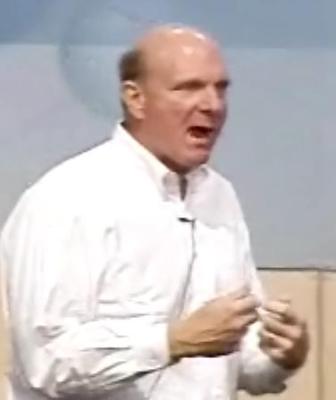 At yesterday’s Intern Product Fair, our CEO Steve Ballmer spoke to us at length about why he’s so passionate about Microsoft, why he’s so excited that so many new interns are coming every year… and blah blah… great speech, and a great Q&A session afterwards.

SteveB: Whoa… I’m not even allowed to use words like that anymore…

SteveB: I can tell you one thing though… it won’t be the first option…

I was highly amused. SteveB later talked about the anti-trust issues involved, but it was funny nonetheless. Great talk, glad I went.

Ballmer recalls a question once posed to him by an intern: Where will Microsoft be 25 years from now? After some thought, Ballmer says, the only thing he could predict is that “we’re going to have great people…. And if we have great people and we have a leadership position today, then everything will take care of itself,” says Ballmer. “We’ll be driving the leading edge of technology. We’ll be making good money. We’ll be earning good returns for shareholders and all of that kind of stuff. But at the end of the day, the only thing that could be the magnetic north compass for the place over the next 25 years has got to be this notion of prioritization of people.”