So, here we are again, the first chapter of another year; another year to forge memories, and all that crap. Or… another year to just blow by and be forgotten (like the last one). I don’t know what it is, maybe it’s just that sophomore-junior transition, but I just feel lost in the chaos of it all. Taking a step back and reflecting where I am shocks me with: “Holy crap! After this, there’re only 3 more semesters left?!”

Sure, it’s can be exciting to know that after this, I’ll know where (out there!) I’m going to be putting my life’s time, but it’s incredibly scary while you don’t know. That was perfectly acceptable as a freshmen, but I still don’t quite know… oh well. I’m sure it’ll come to me.

In any case, it’s 6:31 AM right now at the ECE Student Lounge, and I’m putting my paper off so that I can jog my creative brain, (which as of late, hasn’t really been). Jon is hilariously sleeping off to the side (noted for funniness). A business school kid in the heart of engineering. Hah. Just kidding, really. People are waking up to start their days right now, and here I am, still working. Jon commented that it shows our dedication to academics. I think it shows my latent senioritis. 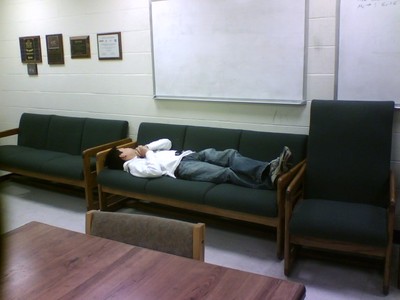 Senioritis and dogged laziness has dominated respectively, my nights and mornings. It’s so easy to ditch ECE 414 in those damned mornings, and of course, why bother with going to CS 225 after that? Especially when the material from those lectures can easily be self-learned through lecture slides and notes? (and of course, Wikipedia) So far, I’ve estimated about 40 skipped classes this semester, and that’s on a 12 hour schedule. Wow. I’ve long wondered what the purpose of a university education was if so much of the material is just as easily learned independently? Even worse, I’ve found that in some classes, the material is better learned away from the classroom by acquainting myself with the problems and seeking peer advice. So really, what is this university education worth? Are our universities providing us what we’re paying for? Or am I just out of the Great Enlightenment that is college education?

I think it’s rather, the latter. Of course, I’m not really criticizing the existence of universities; where else would you find such a concentration of knowledge, talent, and eagerness to learn? The raw materials are all there, in each field, and within each person. I do, however, criticize this particular system of university, and it’s subpar ability to promote enthusiasm amongst us. Yes, we’re adults now and it is each individual’s responsibility to motivate themselves to BE what they should be, but shouldn’t this place, the system that we pay our money and devote 4 years of our lives to, help to encourage us even further? I mention this particular “system”, and here, I’m refering to the public education system of Illinois. It may be beyond my due respects to place judgment, when I know so little of alternatives, but I honestly feel that this university (and less so, public education in general) does a terrible job at breeding motivation in students. Too often, I have felt that this school tries to cultivate a sense of elitism by making administrative things outrageously convoluted, frustrating those with less patience, less aptitude, and most certainly, less experience with red tape, to a point where it is okay for a dean to say “if you can’t handle it, get out.” ECE classes in particular are nortorious for pushing educational Darwinism–(i.e. in the words of a fellow classmate: throw the kids in the deep end, and see who don’t drown. Then throw in the sharks). Maybe it’s because as a school in the top four, it needs to preserve it’s ranking by quickly eliminating those who can’t keep up, or maybe it’s that as a public school, it can’t hire enough happy deans. In any case, I feel that many students, don’t feel at home as they should within this school.

Actually, the paper I’m supposed to be working on has something to do about that. It’s a research paper for ECE/PHIL 316 Engineering Ethics. By far my favorite class this year (and ironically, my worst performing), I’ve been introduced to the existing philosophical paradigms for the first time. Normative ethics in particular caught my attention, and I loved the readings (especailly the SparkNote versions

). Yet my paper focuses on the public image of engineers and why it sucks. Yes, we all know that engineers are often seen as nerds and geeks, but come on now, if you’re studying for any of either the LSATs, MCATs, GREs, or any engineering material, you’re automatically a nerd, so it’s hard to tell how far-reaching that stereotype is. Some of the readings have some particualrly scathing public criticisms of engineers, for example:

“Engineers are too often characterised as being male, socially inept, politically naive and aligned with self-serving developers and they are finding themselves at the centre of controversies they don’t fully understand. Increasingly engineers are subjected to law suits because the public, which has an unrealistic perception of the nature of engineering, blames them when things go wrong.”

“In Britain engineering is “seen as dirty, boring, unfulfilling and financially unrewarding,” says Robert Payne an engineer at the Polytechnic of Wales. British engineer, K. Strauss (1988) , has suggested that the engineer is “seen as a soulless apparatchik, building ever taller, slicker, quicker, more coldly efficient devices that few want and that fewer can afford, which from time to time go hideously wrong.””

A US survey of public attitudes towards engineering found that the public thought of engineers as having “poor social skills” and being “self-absorbed, loners, rigid with a one-track mind” (Braham 1992) . Yet this is not so far from the way some engineers see themselves.

That last part is the worst… an acceptance of low worth. And it gets worse; the effects don’t stop at hurt egos:

“In the business world, engineers are often seen as being preoccupied with technical issues to the exclusion of all else, unwilling or unable to appreciate contextual imperatives or to contribute effectively to business and political decisions. This has probably been the main factor leading to the ‘de-engineering’ of the public sector, and to the view of engineering as a commodity to be purchased when needed–not a critical strategic capability requiring long-term investment and development, or an integral part of decision-making. (Review of Engineering Education 1996, p. 54)”

(All quotes were taken from Expanding Engineering Education )

What is with all this negativism? Honestly, where is all this coming from? And what are the moral causes and effects of it all? Those are the questions that I propose in my paper, and hope to answer through research. Engineering, as a profession is a far more people-oriented subject than any of the previous quotes seem to imply. I think sometimes, even engineering students forget that. The developments from the field are
seen everywhere, from the way things are made, to the way things are seen, this quote speaks what engineering represents: “Scientists discover the world that exists; engineers create the world that never was.”

Blah, why am I writing so much here? It’s nearly 7 AM, and I need to write my paper now. I just hope that things change… maybe this paper will be the start. And then maybe in time, the rest of engineering will re-learn to apply its principles to itself. Or at least… get happier deans.

In any case, here’s a simplified course outlook for the next 3 semesters. Insane… just 3 left? Also, I’m thinking about switching my James Scholar Honors Contract from biomedical engineering to neuroscience (or cognitive science). What do ya think???

Actually, I’m putting this all here because my computer is on the verge of crashing.